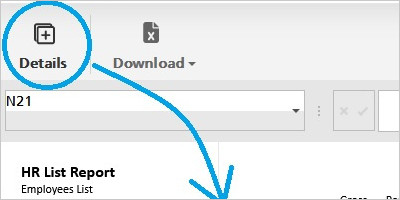 We are happy to deliver the brandnew September 2022 release with the new Details Button and Tree Attributes functions and many other new features! Try it now!

We are happy that we can deliver a new function to show/hide columns and rows. You will find the new button Details in the menu bar, this button shows hidden columns and/or rows:

Pressing the Details button again will hide the columns again:

The Details button is always visible, but it will become active only if the sheet in your workbook has at least one of the following named ranges defined:

Use the following codes in the cells of the named range:

Tipp: use formulas in the cells of the named range in order get dynamically configured details.

We are also really happy that we can deliver now a new and very effective way to show the value of an attribute from the selected element in the dimension tree. Just use the named range for the attribute you want to show in your spreadsheet:

So the new named ranges show the content of the underlying Dimension Table:

Those attributes queries work also on sum level: if there is only one distinct element in the query, then this element is shown. If it would bring multiple values then nothing is shown.

We have created a new named range “Path” in order to create a breadcrumb display of the currently selected item in your workbook.

Use the following two named ranges:

… it is now possible to edit all attributes from your dimension tree and not only the Key, the Name and the Element Type:

The definitions of the editable attributes are set in the new menu item Edit Tree. Simply add the attributes to the list and define which ones are editable:

The definitions are applied also to the Add element function …

… often it makes sense to leave some attributes not editable when creating a new element:

We have added a Reload tree function to the context menu. With this function you can reload the dimension tree without refreshing the whole page after changes were made (e.g. in the dimension table in the Web App).

Simply type your search term to get the tree filtered:

In the July 2022 Release we introduced the “Large Data Improvements for Uploads“. In this release we’ve finally solved the issue of uploading large data with the introduction of the new background tasks.

Starting an upload into a table starts the background task, you see it in the new Background Task status bar and you can also cancel the process at any time. The data is uploaded with a paging mechanism from the client into the browser and after that the insert into the table is executed on the data1.io Cloud Service:

You`ll get a notice when the background task is finished:

We have solved issues 2 issues with the Always Encrypted feature: TLS 1.0/1.1 was not supported and the measure fields could not be filtered in the Web App. Furthermore there were issues with a sql error on writeback under certain circumstances and with the “Unsaved data” message box when using trigger cells in the workbook.

Stay healthy and we #StandWithUkraine

Release July 2022 (before the summer break)