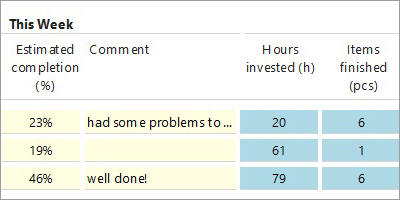 We are happy to deliver the brandnew October 2021 release with the next version of the Power BI Custom Visual . Try it now!

In the May 2021 release we introduced the first version of our Power BI Custom Visual (which was a prototype):

Now, we invested for the next generation of this visual to make it not only more beautiful but also more powerful:

Just edit the values and texts in the custom visual and immediately see the aggregation in the Power BI charts and tables (by using a Direct Query datamodel with automatic Change Detection):

Sure, you can use the Power BI Custom Visual and the data1.io Web Client in parallel, both clients show the same values from the data1.io application (of course):

Please be aware that also this Gen2 visual is a proof-of-concept and not part of the data1.io production environment. If you are interested in usimg this technology for your company please feel free to contact us!

We are happy to present our new Public Showcases landing page which is more compact and up-to-date:

Just for comparison, this was our old page:

Analyzing or editing wide tables needs more space – therefore we have implemented the new hide/unhide function in order to expand or collapse the navigation pane:

Due to the the Power BI Custom Visual as well as due to our tests with Power Apps we decided to streamline the anyway small showcase for “Weekly Project Status”:

Furthermore we changed the record structure for this showcase “from vertical to horicontal”, i.e. several values and texts are now stored on the same record in the fact table:

Formerly there was a problem with elements on the same level with the same name: the data1.io query engine summed up all values with this element name but took not into account the branch of the dimension tree. Now we have changed that and the query engine retrieves the aggregations for an element by querying also the above levels of the element.

This way, two “Team 1” elements on the same level of the dimension tree get the right aggregated values on both elements:

For the sake of completeness: this feature was already implemented in May 2021 but not communicated until now.

With the May 2021 release we introduced the new paging mechanism for large tables (> 1000 records). One remaining issue was sorting & filtering for text fields in such tables, which was only applied to the 1000 records in the current page. This is solved now so that filters and sort commands are applied in the backend to the whole table:

For the sake of completeness: this feature was already implemented in May 2021 but not communicated until now.

We had an issue when uploading data into the fact table which contain empty strings (“”) instead of null in the dimension key fields. As a consequence the values of such records could not be shown in the workbook, this is solved now.

Furthermore we improved the READ performance in multi-sheet workbooks, since we found out that the recalculation was done for every sheet although once for all does the same job in much less time.

Finally, records with empty date fields in the fact table caused an error when the table was downloaded, this is solved now as well.

Two weeks ago I had a session at the SQL Days 2021 in Munich (Germany) called “Power BI and Data Entry”:

I used data1.io as “SQL based planning engine” to show how a Direct Query application in Power BI has to be setup and how Power Apps and Power BI Custom Visual can be used as alternative frontends to Excel:

The solution for larger application is “calculation power” in the form of additional DTUs (see bottom right).