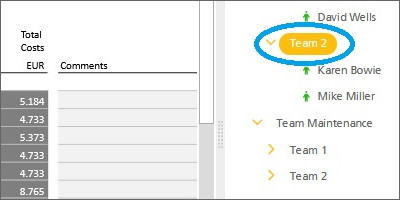 We are happy to deliver the brandnew October 2022 release with the new dimension tree setting in multi-sheet workbooks and many other new features! Try it now!

Until now, in multi-sheet workbooks the dimension tree was always reset to its initial configuration when the sheet was changed.

With this release, every sheet stores now its individual tree configuration when the sheet is left:

In this sheet the tree configuration is different and also stored individually with this sheet when it is left:

In the last Release (September 2022) we launched the new Details function to hide / show rows and colunns by pressing the new Details button. We have learned that this feature is slow if there are a lot of rows and columns and if the steering parameter is calculated with formulas.

Therefore we have improved the feature by stopping the formula calculation during the show / hide process and then trigger a recalculate() after the process. This improves performance e.g. from 10 sec to 3 sec.

(4) Web Client: Changes on READ with the empty string “”

(5) Web Client: Changes on WRITE with the 0 and the empty string “”

From now on, 0 in measure cells are written back to the fact table as a record. This is important especially for the new forward projection feature which we introduced in the July 2022 Release. The writeback of 0 enables now the reduction of an existing projection down to 0 (until now you had to enter something like 0,001 to bring the value down to nearly 0).

On the other hand, empty strings (“”) in measure cells are not written back since this would cause a data type error on the numeric fields of the fact table.

This can be an important change for your application: if you don`t want that a result is written back you have no to output an empty string instead of a 0.

Until now, a mix of different levels in a level query did not work – only the values for the keys were delivered:

With this release you can mix the levels as you like:

Please note that this is only a technical demo (the values and sums do not make sense).

The deletion is executed as background task on the server, the status bar is shown during the process is running and after it is finished:

This new background task guarentees that the deletion works reliable also with a large amount of data.

We have solved an important issue with the new parameter data1_ReadOnSheetChanged on writeback. Another 2 issues with comments were solved, the comments were not shown properly under certain circumstances. Issues in the workbook wizard and a wrong interpretation of percentage figures in the sheet are solved now as well. Furthermore we solved an issue in multi-workbook / multi-workflow environments.

Stay healthy and we #StandWithUkraine